Using signs creatively can convey a contradictory or funny meaning for your picture.

Driver of U. S. Mail truck seems to read the sign wrong as he stops in front of a “Male Stop” sign in Lowell, Ma. (© Michael Maher, The Lowell (Ma.) Sun). 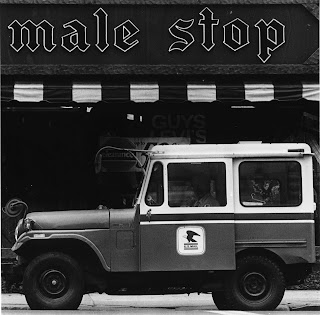 The Photo:
Signs help explain your photo further or add humor by communicating a different meaning from what is typically intended.  I had passed the Male Stop clothing store in Lowell, Ma. many times and repeatedly noticed the big sign, but when a mail truck stopped in front of the store, it momentarily provided me with a chance for an amusing shot.  Fortunately, I was walking along in the right location, had all my camera gear handy and the truck was stopped momentarily for a red light in just the right place.  After I shot two frames, the light changed, the truck moved, and the photo was gone, but I was able to capture a humorous picture.  Had I missed getting the shot, I at least had the great idea, and would have tried capturing this photo another time.
3 Tips:
1) Signs can help create humor when they communicate a different meaning in the photo than what it typically intends.
2) Other times signs can be used in a straightforward way to further explain what is going on, such as the location or activity.
3) Because signs are often in place for long periods of time, you’ll have repeated opportunities to create great sign photos.
Posted by MoMaher at Tuesday, May 29, 2012 0 comments

One Leap, One Hand, One TD

One of the best and most acrobatic football photos you can get is a receiver and defender jumping in the air with the ball visible.
Austin Prep (Andover, Ma.) football player outreaches an opponent to make a one-handed touchdown grab (© Michael Maher). 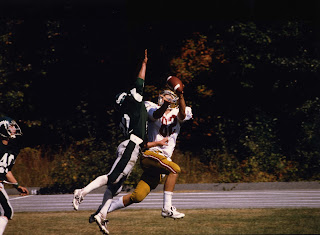 The Photo:
In this high school football game, it was easy to anticipate the upcoming plays because a passing team was trailing, so almost every play they ran was a deep pass downfield to try and score quickly.  Thus, I stood deep downfield to photograph various receivers trying to make a touchdown catch.  The only challenge was determining which receiver the quarterback would be throwing to.  On this play, I anticipated a long pass to the receiver on the far side of the field, so I followed the receiver and defender in my viewfinder despite other players and officials running in front of me.  The receiver jumped, grabbed the pass with one hand away from the defender, and I snapped the picture.  I had the photo I wanted as he ran into the end zone for a touchdown and celebrated with his teammates.
3 Tips:
1) Successful football photography requires anticipating the upcoming plays and the area on the field where the action will occur.
2) Position yourself to get the best possible photo, with the ability to react quickly to get different shots if the play is different from what you expect.
3) Pictures of passes are often more spectacular, but shoot running plays first because they are usually easier to photograph.