If you spot a famous person doing an ordinary thing, it can make a newsworthy photo that news outlets will pay to use.

Governor Michael Dukakis rides the Boston subway (the “T”) to work at the Ma. State House during the Blizzard of 1978, when over 20 inches of snow fell on Boston and closed the city for almost a week (© Michael Maher). 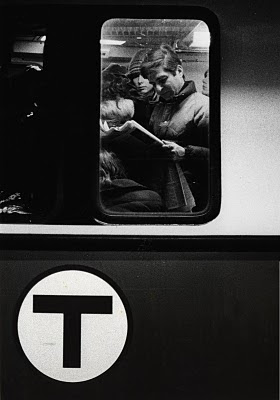 The Photo:
Years before he became the Democratic candidate for President, Ma. Governor Michael Dukakis was even then a modest, unflashy personality. I was riding the Boston subway (the “T”) with some friends during the infamous Blizzard of ’78, when I spotted him in the train car ahead of me. When the train stopped at the next station, I jumped out and shot several photos of him through the train window as he read his newspaper among the heavy crowd, never looking up as passengers pushed and shoved to get on. No one even spoke a word of recognition to him, which was how he liked it, as he took the “T” to his office at the State House. I was lucky to happen upon him, but prepared enough to have my camera with me, which I learned early-on that a photographer should always keep handy. This was a humorous photo of a famous politician because few Massachusetts residents imagined their Governor riding the subway to work with thousands of ordinary commuters.

3 Tips:
1) Look for photos of famous people or high government officials doing normal day-to-day activities.
2) The best photos show them not looking special but being very normal and unassuming.
3) Keep your camera with you whenever possible so you are always ready for this type of unexpected photo opportunity.
Posted by MoMaher at Thursday, September 23, 2010 0 comments

Kids can be so clever and imaginative that sometimes all you have to do is shoot exactly what you see them doing.

James Cullen, left, tries to can a jumper over his friend David Dion as they improvise a game of basketball using a bucket, rope, and a ball in Lowell, Ma. (© Michael Maher, The Lowell (Ma.) Sun). 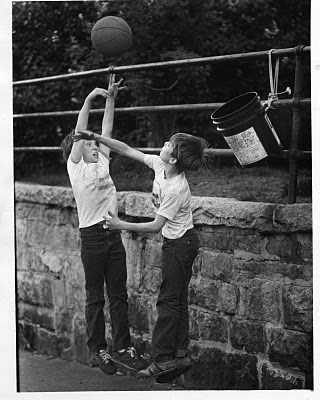 The Photo:
I accidentally came upon this photo while enroute to another event. These two boys created their own basketball equipment out of a bucket and a piece of rope, rather than walk all the way to a playground to find a real basketball hoop. They were very intense about their play, and only slowed down to retrieve the ball from the bucket when one of them made a shot. It was a creation very much like Dr. Naismith’s original peach basket. I stopped and used a long lens to shoot their play, so they barely noticed my presence as I photographed them from just across the street. They shot, jumped and rebounded aggressively, as if there was a lot at stake, and it made for a great picture when they treated this makeshift basket like a real one.

3 Tips:
1) Seek out photos of kids inventing new, creative ways to play.
2) Capture the physical intensity and body extension of kids when they are playing sports.
3) Watch for emotional facial expressions to make photos of physical feats even more powerful.
Posted by MoMaher at Friday, September 17, 2010 0 comments

A young boy appears stretched across the car as his head emerges from one side and his brother’s feet from the other in Lowell, Ma. (© Michael Maher, The Lowell (Ma.) Sun).

The Photo:
I watched two boys playing energetically in a parked car for several minutes as I tried to imagine the best possible picture. Initially I couldn’t envision any particularly high potential photo opportunity, so I didn’t even take out my camera. Suddenly, one kid stuck his head out of the passenger window and the other hung his feet out of the driver’s side. For that split instant, you couldn’t clearly see the two separate bodies, and it looked like one kid was stretched horizontally across the entire car. The kids quickly moved on to other play, but that previous moment sparked a photo idea. I pulled out my camera and long lens, staying at a distance, but waited in vain as the moment did not reoccur. Finally, I walked up, asked them to do it again, stood further back framing the photo, and crouched down until the entire rear window was so dark you couldn’t see the shapes that revealed it was two kids, not one.

3 Tips:
1) Be patient to watch kids playing for awhile because they often provide completely unexpected photo opportunities.
2) If you miss a great photo moment, it’s OK to set the subjects up and ask them to do it again.
3) Use different angles or lighting to create additional effects or hide undesired details.
Posted by MoMaher at Thursday, September 09, 2010 0 comments

Let's look at how mirrors and reflections can add a whole new dimension of creativity to your photos. 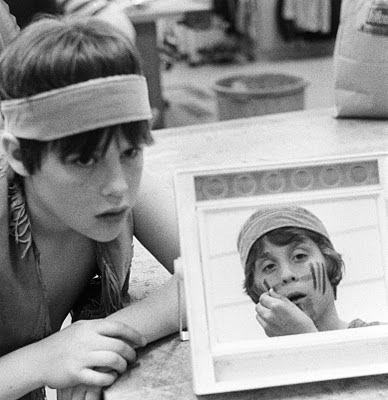 The Photo:
Photographing a local school variety show, I looked for something in addition to the usual shots of kids on stage. I found performers putting on makeup backstage, with one boy intently watched his friend. I noticed the mirror and looked for an unusual angle or perspective for my photo. Reflections can help portray simple activities and interactions with an unusual and creative vantage point, but be sure you shoot from multiple angles, while keeping your own reflection out of the photo. I initially considered photographing only the kid applying makeup, either from the back with his face showing in the mirror, or from the side so you could see both his face and reflection side-by-side, but these were rather ordinary. When I saw that the mirror created a unique angle, simultaneously showing both the face of the kid applying makeup and the one watching, I knew this was a powerful shot.

3 Tips:
1) Mirrors and reflections provide a great opportunity to creatively portray simple interactions and activities.
2) Try photographing from a range of angles and perspectives, but be sure to keep your reflection out of the picture.
3) Be so creative that people will wonder how you took the photo.
Posted by MoMaher at Thursday, September 02, 2010 0 comments