Famous people doing practically anything is newsworthy and can get you published. 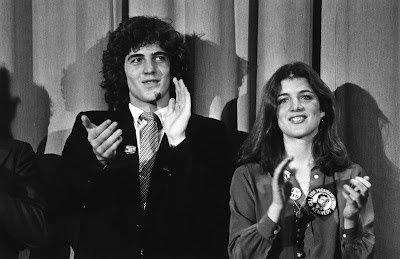 The Photo:
No matter where they went or what they did, the family of the late President John F. Kennedy, was news. As a result, his two children avoided the public eye when they could, making their every public appearance even more newsworthy. For their uncle’s primary victory party, their presence was not announced in advance, but most members of the press were hopeful and readying themselves to photograph JFK’s kids. Sure enough, on this evening they appeared on stage with the most of the Kennedy family to celebrate Ted’s win. Even a simple photo of them looking on and applauding was newsworthy because of their celebrity. Unfortunately, it was one of the few bright spots of Ted Kennedy’s presidential campaign as he lost his 1980 bid for the Democratic Party presidential nomination to incumbent Jimmy Carter.

3 Tips:
1) Practically any photo of famous people is newsworthy, especially people who are normally secluded from public view.
2) Expect security or a mass of media trying to follow and photograph famous people, which may restrict your photo opportunities.
3) Photograph the famous people doing something interesting or reacting to the event, along with tight head shots and facial expressions.
Posted by MoMaher at Friday, July 27, 2012 0 comments

An ordinary photo can become far more impactful if you make it a silhouette. 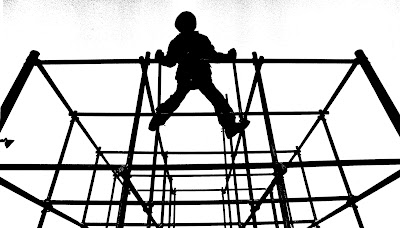 The Photo:
While searching for an interesting photo late one afternoon, I was nervous I might not find anything before the sun went down, when it would be too dark to shoot outside. Luckily, I found a kid playing atop a Jungle Gym, but still had to turn this into an interesting photo. The setting sun provided the answer, as the sky was still brightly lit while the sun was out of sight. This meant I could easily shoot a silhouette of the kid and the bars on the Jungle Gym, because neither had direct light shining on them, leaving them dark, while the sky above provided a perfect bright background. I got low to the ground and shot the shapes of the Jungle Gym bar, with the boy perched on top, and the combination of the boy’s shape and lines of the equipment made a great silhouette picture.

3 Tips:
1) Common play activity can be made into a strong photo, through different angles and lighting.
2) If the subject is not well lit, shooting at a low angle against a bright sky can create an interesting and unusual silhouette effect.
3) Include repetition of angles and lines, with a person’s shape breaking up the repetition, to make your photos more compelling.
Posted by MoMaher at Wednesday, July 04, 2012 1 comments