Look for closeups of famous people showing their personalities. 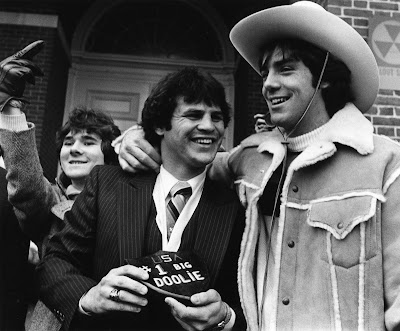 The Photo:
Two of the heroes of the 1980 Gold Medal winning U. S. Olympic hockey team were local Boston stars that played for Boston University’s stellar college hockey team. Mike Eruzione was the Olympic captain, Jim Craig the impenetrable U. S. goaltender and they were honored at a ceremony in front of the Ma. State House. This had been announced days before, so there was a crush of both spectators and media. I managed to slither to the front of the horde, and shot several pictures of the jubilant Eruzione and Craig clowning around while mugging for the cameras. Usually these ceremonies are long, tedious and the honorees look bored, but it was cold outside, which kept the festivities short, plus the excitement of their accomplishment hadn’t yet worn off, so they were very enthusiastic, making for great photos. Though I was an unbiased member of the media, I was also a fan who was proud of their performance, but I resisted the urge to cheer, and concentrated on getting my best photograph. I later sat next to Eruzione on a plane, and he autographed this photo for my two children.

3 Tips:
1) Practically any close-up photos of famous people are considered newsworthy.
2) The best photos capture their emotions and depict their personalities.
3) Even if you are a fan, concentrate on getting the best photos before relaxing to enjoy meeting them yourself.
Posted by MoMaher at Wednesday, August 15, 2012 0 comments