Keep your camera trained on any star player returning to face his or her former team.

New York Rangers’ forward and former Boston Bruin star Phil Esposito (L) raises his stick in celebration after scoring his fourth goal of the game past Bruin goalie Jim Pettie to pace the Rangers to a 7-4 win in Boston (© Michael Maher, The Lowell (Ma.) Sun). 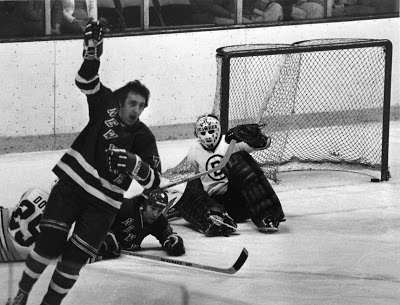 The Photo:
Revenge by a player who was traded is a great storyline for fans and the media, but one that doesn’t often play out successfully.  When former Bruin Phil Esposito returned to Boston as a member of the New York Rangers, his current team was having a very successful year, but the Bruins were not.  “Espo’s” return and possible revenge was seemingly all that was discussed in Boston during the days prior to the game, though he had been traded a while before.  I positioned myself at center ice with my 300MM lens so I could easily photograph the entire ice rink and both teams’ goals.  Esposito got his revenge by scoring four goals and leading his Ranger team to victory against his former Bruin club.  Whenever Esposito was on the ice, I kept my camera focused on him, but other players blocked my view of his first three goals.  On this last one, I had a clear view, as both a happy Esposito and the dejected Bruin goalie gave me contrasting reactions as the puck lay in the net.  This was another “victor and vanquished” photo, but it was far more significant because it told the story of a player’s triumph when returning to face his former team.
3 Tips:
1) The return of a traded player is a great storyline and terrific photo opportunity.
2) Concentrate on photographing almost everything the returning player does during the game because you are likely to see emotion if the player does exact some revenge.
3) The best photo is of the returning player looking happy or celebrating, even better if his former teammates look sad or dejected in the same image.