It's wonderful when a holiday photo can simultaneously captures a family member's personality.

Megan Maher, left, winks as she poses with her sister Colleen for her annual Easter photograph (© Michael Maher). 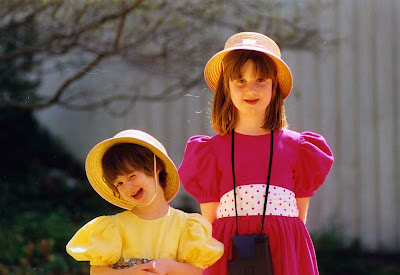 The Photo:
Each year, we took a photo of our daughters in their Easter clothes, sometimes with other family members or friends, other times alone together. The key to making this a great photo is capturing an outstanding facial expression and lighting the shot in a way that highlights the dress clothing. This year, the weather was nice, the sunlight was bright, so I found a dark background against which to place the children where the sun could shine on them from behind. This took awhile to set up, but the backlighting effect highlighted the bright colors of their Easter Sunday dress clothes. I took several pictures, but the kids were getting bored with the routine, and I could not get them to show any interesting facial expressions. Fortunately, Megan decided to ham it up for the camera, cocked her head, and winked at me. The beautiful highlighting of their colorful clothes and Megan’s funny wink made this one of the best Easter photos we ever took.

3 Tips:
1) For holiday portraits of your children, capture interesting facial expressions and show what their clothes look like.
2) Backlighting with the sun shining from behind is a great way to highlight colorful clothing.
3) Determine the photo you want to take and where you want to line it up before asking kids to pose, or they’ll get bored quickly.
Posted by MoMaher at Friday, February 17, 2012 2 comments

Montreal vs. the Media

The crowds of media covering an event often provide better photos than the event itself.

Victorious Montreal Canadiens pose in a team picture for a group of photographers after defeating the Boston Bruins in six games to win the 1977-78 Stanley Cup Championship (© Michael Maher, The Lowell (Ma.) Sun). 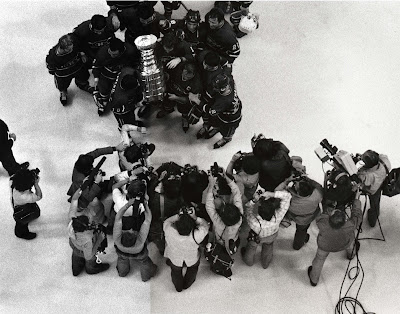 The Photo:
For the second consecutive year, the Montreal Canadiens were in a position to win the Stanley Cup championship against the Bruins (potentially their third title in a row). I didn’t have the official press pass to go onto the ice surface and photograph the Canadiens as they were crowned National Hockey League champions, so I needed a good photographic vantage point that didn’t require special access. At first, I planned on moving down to the front row of seats to shoot the winners, like all the other fans. However, when I looked up and saw a catwalk high above the ice surface, I realized it could provide a more unusual and interesting angle. I quickly climbed to the very top of the building where I fortunately found the catwalk entrance open. As the game concluded, Montreal won the game and championship series 4-2, and I had a clear overhead view of the entire celebration, as the team skated around the rink holding the Stanley Cup aloft. I did manage several standard photos of players skating while holding the Cup overhead, but this was too common, so not very interesting. The champs quickly posed for a group photo with the Cup, and the horde of credentialed press photographers crowded into another swarm across from the Montreal team. With a 180MM lens, I easily shot this overhead perspective of the two groups, which was a compelling alternative to the typical ice level shot of players holding the Stanley Cup over their heads. Not having on-ice access forced me to come up with a strong, yet unusual, photo.

3 Tips:
1) When you don’t have the shooting position you want, be resourceful to find an alternative, more powerful photo.
2) The cheap seats high up in an arena will often give a vantage point that almost mirrors an overhead view.
3) Sometimes the crush of media coverage can provide its own unique photo.
Posted by MoMaher at Friday, February 03, 2012 0 comments