The emotions and facial expressions of basketball coaches often provide better photos than the game action.

Boston’s Dave Cowens displays a range of emotion and intensity during his debut as player coach against the Denver Nuggets, as the Celtics won to end a six-game losing streak (© Michael Maher, The Lowell (Ma.) Sun). 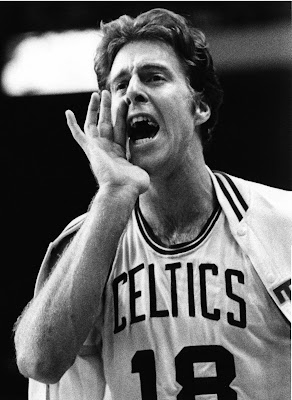 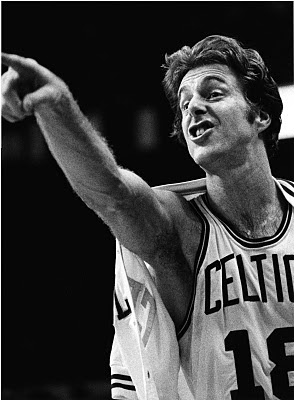 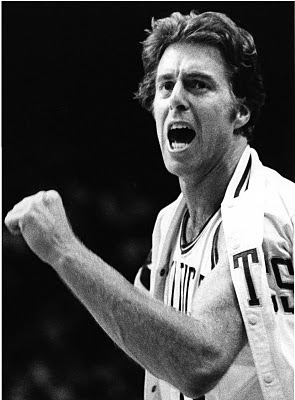 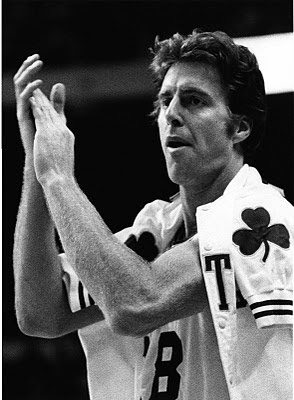 The Photo:
Dave Cowens of the Boston Celtics was one of the NBA’s most emotional players. As a 6”9” center, he needed to play with intensity to be successful against opposing centers who were much taller and stronger. Earlier in his career, Cowens was called for a series of cheap fouls during a game, and he ran across the court hard into the Rockets’ Mike Newlin, knocked him to the floor, proclaiming to the referee, “Now THAT’S a foul!” He once took some time off and drove a Boston cab because he wanted a break from the intensity of NBA life. So it was no surprise when Cowens, who was in his first game as Celtic coach while also still a player, leaped off the bench to exhort his teammates and direct referees during a tense time of a tight game. Positioning myself between the team benches, I used a long lens to capture several close-ups of Cowens’ many expressions, and published the four best. (I was a bit too close on one picture where I missed the tip of Cowens’ index finger.) The photos also reflected how frustrating it was for Cowens to play for and coach the Celtics that season, after John Havilcek had retired and before the Larry Bird era. These photos were transmitted via the wire services around the country, and you will still occasionally see one of them published whenever there is a story about Dave Cowens. Good close-up photos of famous people will often be reused for years.

3 Tips:
1) Emotional coaches can provide outstanding sports feature photos.
2) Sit near the player benches and concentrate on the coach for an extended period of time.
3) Close-ups are the best pictures, so use longer lenses as much as possible.
Posted by MoMaher at Thursday, November 24, 2011 0 comments

Face of An Archer

Close-ups of archery can provide very strong images, as I learned the first time I photographed the sport.

Archer never loses his concentration as the bow mangles his face during an archery championship at U. S. Olympic Festival (© Michael Maher). 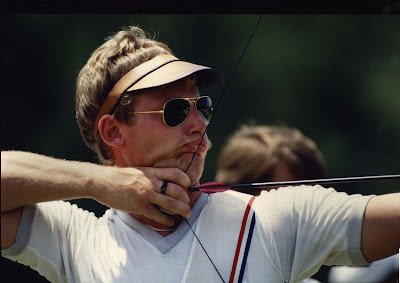 The Photo:
I never shot archery before, and with little advance warning to do any preparation for the event, I had to learn as it unfolded. The first thing I noticed was how tightly the archers pull the strings against their faces before they shoot. All the world class archers in this event seemed to do it, although some made much more interesting pictures than others. I shot several photos of them releasing the arrows, and reacting to their shots, but I kept thinking back to the scrunched-up faces – there was nothing better visually that day to convey their intense concentration and the difficulty of the event. I found one archer who had the best face of all, for he never wavered in his concentration, no matter how much he distorted and abused his poor face with the bow string while aiming. I don’t remember his exact place in the event, but he was easily the top archer for concentration.

3 Tips:
1) Because archery is about shooting the arrows at a target far away, the best photos capture the archer, not the target.
2) Archers provide great photos as their faces concentrate very intently before shooting.
3) Another terrific photo is the archer in the act of letting the arrow fly, but avoid being in the line of fire.
Posted by MoMaher at Friday, November 11, 2011 0 comments