One photo with great news value is when a high profile politician endorses an up-and-coming candidate. 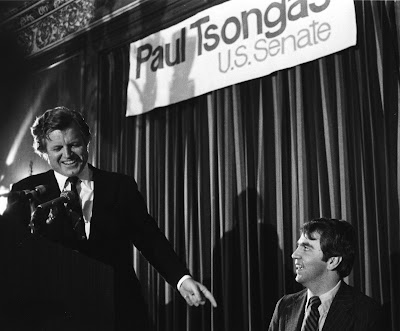 The Photo:
Paul Tsongas was an up-and-coming Democratic politician from Lowell, Ma., challenging longtime incumbent U. S. Republican Senator Ed Brooke from Ma., who was then the only African-American in the Senate. Brooke had been dogged by recent scandals, which also helped improve Tsongas’ prospects. One of the most important boosts for Tsongas’ campaign was an endorsement by Ted Kennedy, the other Ma. Democratic Senator, and a local luminary. I photographed the formal endorsement at a fund-raising dinner, including several photos of Kennedy and Tsongas individually speaking. However, the one photo that best conveyed the relationship between the two men, and Kennedy’s eagerness to help Tsongas win, was Kennedy speaking at the podium and telling a joke about Tsongas, while Tsongas retorted from his seat. Twelve years later, Tsongas was a Democratic candidate for President, until Bill Clinton beat him in the primaries. Sadly, Tsongas later died of cancer, as did Kennedy.

3 Tips:
1) Political endorsements from renowned political leaders are newsworthy moments.
2) Most endorsement photos are merely the endorser speaking from the podium.
3) Look for moments where the endorser and the person being endorsed interact, and capture them both in the picture.