Here's one multiple exposure technique to have fun with, called Open Flash. 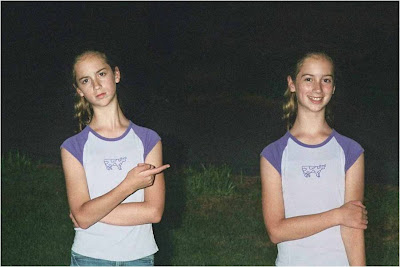 The Photo:
The Open Flash technique makes it easy to combine multiple images of the same subject, using outdoor or indoor darkness. Electing to shoot at night, I put my camera on a tripod, set the shutter to the manual setting B, and connected a cable release. After positioning my daughter Megan on one side of the viewfinder, I pressed the cable release to hold the shutter open in the dark, and fired the flash. While continuing to hold the cable release to keep the shutter open, I moved her to the other side of the frame and fired the flash again. I then released the shutter, and came away with a single photo of Megan’s multiple images. Megan helped make the photo much more interesting by appearing to react to her other image. You can enhance this type of photo further by changing the subject’s clothing or even adding a third image.

3 Tips:
1) Open flash is an easy use of outside or indoor darkness to create a multiple exposure photo.
2) Keep the camera still by putting it on a tripod and using a cable release.
3) Place your subject and fire the flash, then move the subject and fire the flash again, to create multiple images in the same frame.
Posted by MoMaher at Saturday, July 31, 2010 0 comments

The pole vault is a terrific sport to photograph, especially when you can capture the dramatic bend in the bar.

Pole vaulter bends his pole at an almost 90 degree angle on his way to clearing the bar at 18 feet during the U. S. Olympic Festival in Durham, N. C. (© Michael Maher). 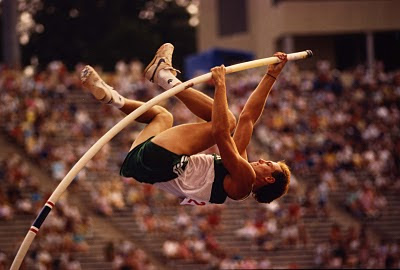 The Photo:
Shooting the pole vault lets you capture the athletes’ tremendous body control and concentration as they hang on to the long pole, fly 15-20 feet into the air and land correctly onto a small cushion. What’s also amazing from a photographer’s perspective is how much the pole actually bends when the vaulter first plants it and rises into the air. I’ve seen other photographers capture this in many different ways, from overhead so the pole looks almost bent in half, and in front when the vaulter grimaces while hanging onto the bent pole, eyes riveted on the bar. I didn’t recall ever seeing a photo taken from the side accentuating the bent pole, and providing a close-up of the vaulter so you can see his expression. At this track meet, I stayed by the side of the event and shot nearly all the competitors. It was a tough shot to get --- using a long lens I stood back a significant distance, patiently waiting as judges, coaches, and players walked in front – but I timed this shot just right to capture the vaulter in mid-flight.

3 Tips:
1) The pole vault is a very acrobatic sport and makes for great pictures.
2) Photograph the athlete in the air on the way to going over the bar.
3) Try to capture the extreme bend in the pole to make the photo stronger.
Posted by MoMaher at Saturday, July 24, 2010 0 comments

Getting a sports picture of your kid can be a bigger challenge than shooting professionals!

Colleen Maher, right, of the Tigers, shouts for joy as an Aggie opponent is out at first base during the opening game of the New Castle, N. Y. girls’ softball season, while her teammate Beth Gladstone also cheers (© Michael Maher). 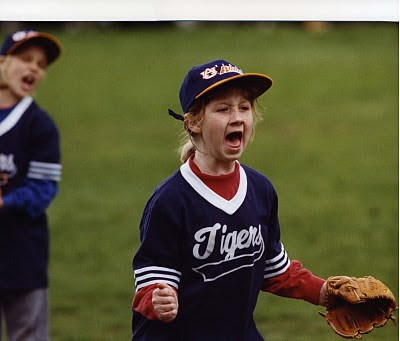 The Photo:
When you’re trying to shoot a great sports photo of your kid, it can be harder than photographing a major leaguer. Usually, young kids are more likely to show emotional reactions more often, and on more routine plays, than adults and older players, but there were two challenges in this game. First, it would be difficult to find an emotional reaction because the softball game was a blowout, there was no doubt about the winner, and the players just wanted the game to be over. Second, I wanted to photograph my daughter Colleen, who was a participant, but she constantly hid her face because she was self-conscious whenever my camera pointed her way. Several times I tried, but was unable to get, a good photo of her playing because she wouldn’t relax to show her natural emotions and reactions. Nevertheless, I persisted because she was beginning to tolerate and ignore me. Standing on the first base line, I alternated between photographing her batting and fielding during this game when her team was getting beat very badly. The last thing I expected was a strong emotion or reaction, but on a grounder to second, her teammate threw the runner out on a close play at first to end a long inning, and Colleen unexpectedly cheered the out with body English, emotion, and an intense facial expression. At that moment, I was pointing my camera on another player, but as I heard Colleen yell “yeah!” I turned, quickly pointed my camera at her, without time to fully look through the viewfinder, and took what was a great picture. I submitted it to our local newspaper, and when it was published, all Colleen’s friends and teammates got to see her in print. While I felt proud I had given my daughter a few minutes of fame in her hometown, the big benefit for her was I would stop stalking her with my camera during her games.

3 Tips:
1) Watch the fielders during the game, especially with no runners on base.
2) Focus on players most likely to show emotion or ones you want most (e.g., your kid).
3) Be ready to react quickly to something unexpected.
Posted by MoMaher at Saturday, July 17, 2010 0 comments

When taking a portrait, try to identify and capture a subject's unique features and personality traits. The Picture:
I was scheduled to photograph Elmer Bussey, who was in the midst of his 13th run for governor of New Hampshire. Before meeting him, I learned that the candidate was missing some teeth, and the moment I met Bussey, I saw that his unique smile would convey his personality and create a terrific photograph. I didn’t want to tell him my plan and make him self-conscious about smiling, so I lined up a portrait against a clean, simple background, as he held up his campaign bumper sticker (“No New Taxes”). We joked around -- he was a very friendly man -- causing him to laugh and break into a wide smile. I stood back with a medium-range lens, close enough to converse, but far enough back so his face stood out prominently from the background. His wide grin gave me the powerful, winning personality photo I was looking for. Bussey was a very nice man and most people would agree with his campaign slogan, but he didn’t win the election.
(It was a great shot, but I realized later that having him stand, arms folded, next to the Bussey sign, would have more clearly conveyed that HE was the candidate.)

3 Tips:
1) A broken smile or missing teeth creates a very strong picture of both adults and children.
2) Photos are much stronger when combining a strong expression with elements that depict the person’s occupation, significance, or accomplishments.
3) Frequently you need to interact with your subject in a way that coaxes an expressive reaction.
Posted by MoMaher at Friday, July 09, 2010 2 comments

Right Where it Hurts

Soccer is a wonderful sport to photograph because it is played outside in the bright sunlight, and you can clearly capture players’ intense facial expressions as they kick, head the ball, or collide.

Lawrence soccer player grimaces in mid-air as he is hit by a kick from a Billerica opponent (© Michael Maher, The Lowell (Ma.) Sun). 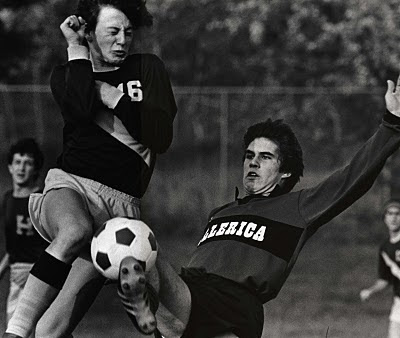 The photo:
This was a mid-season high school boys’ soccer game, and I already had several good action shots, but was hoping for something outstanding. Standing near midfield, I started looking for tight, close-up shots with intense facial expressions. Suddenly, right in front of me someone went high in the air to block an opponent’s kick, and recoiled as the ball hit him. It was so close to me when I fired the camera that I almost couldn’t see the whole image, although I knew I had a good expression. Making the picture even better was that the ball clearly hit him in the crotch, which was what made him grimace so much.

3 Tips:
1) Soccer kicks and collisions are among the best soccer action photos.
2) To get great soccer action, follow the play up and down the sideline.
3) Always strive for intense facial expressions.
Posted by MoMaher at Friday, July 02, 2010 0 comments