Run Through the Sprinkler

Young boys run through the sprinkler to keep cool on a hot summer day in Lowell, Ma. (© 1980 Michael Maher, The Lowell (Ma.) Sun). 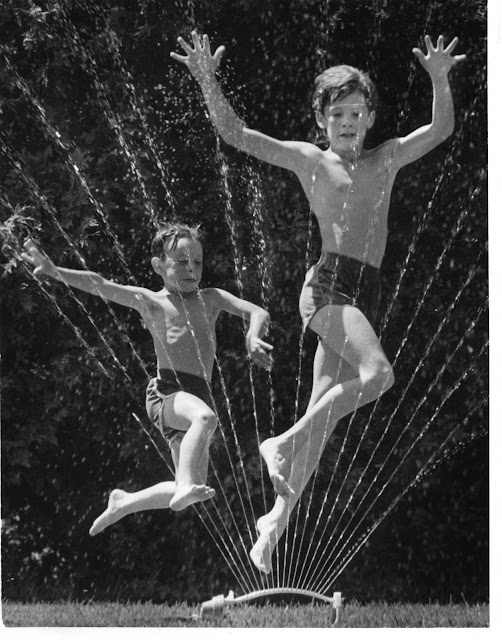 It was an oppressive summer afternoon and I was searching for a picture of someone coping with the hot weather, when I spied kids playing in the water spray from a yard sprinkler. I watched for several minutes, trying to devise a unique picture. The sun was backlighting the kids and the water spray against a perfect background of dark trees, so it made for a nicely lit photo. I stood at the perfect angle to capture the backlighting, shot several images of the kids playing, including this shot that was more artistic and beautifully lit than most sprinkler photographs.

Reminder:
1) One great weather-related picture is kids cooling off from the summer heat.
2) Sprinklers and swimming pools are the most frequent ways kids cool off.
3) Use the sunlight to highlight the subject and make it stand out again a clean, unobtrusive background.


Listen closely to the local police radio for breaking news photo opportunities like rescues.
When a young boy ventured from the banks of the Merrimack River and found himself stranded on rocks in the middle of the river, he was rescued by Lowell, Ma. firefighters, who rowed out to grab him, pulled him into the boat and lectured him as they rowed back to shore (© Michael Maher, The Lowell (Ma.) Sun). 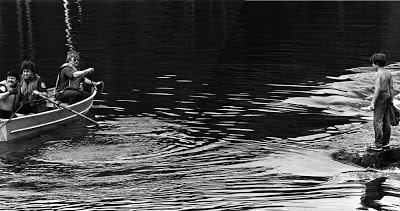 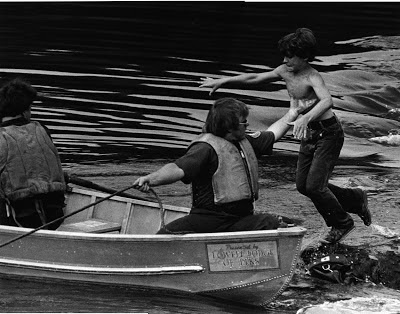 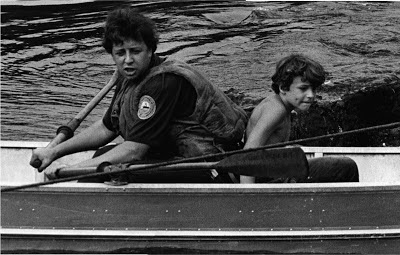 The Photo:
One hot summer Sunday afternoon, a kid was discovered stranded in the middle of the Merrimack River.  The young boy had wandered along the rocks into the center of the river at a shallow spot, but when the water level began to rise, he was marooned in the middle.  When I arrived on the scene, three members of the Lowell, Ma. Fire Department were rowing out to the rescue.  I was there in time to photograph with a long lens and get a sequence of photos – the boy stranded on a rock as the boat arrived, the kid being lifted into the boat, and the fireman lecturing him sternly during the return trip to shore.  It was a compelling series of three photos that definitively told the story.  No doubt that kid learned his lesson and never did anything like that again.
3 Tips:
1) Rescue photos usually require long lenses because you typically can’t get very close.
2) The best pictures are just as likely to be of the rescuers as the people being rescued (sometimes the spectators also provide great images).
3) Look for emotional facial expressions -- intensity during the actual rescue, or relief afterwards.
Posted by MoMaher at Friday, November 30, 2012 0 comments 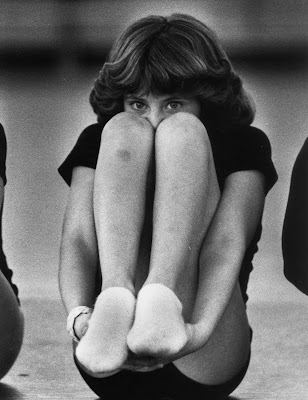 The Photo:
When I photographed a youth gymnastics competition, I first shot competitors in action on the balance beam, parallel bars, etc.  However, since these were very young kids, it was unlikely they would provide spectacular action or difficult feats.  I shifted my attention to other gymnasts watching, in case I could find expressions of emotion after a friend or teammate had a stellar performance.  When I pointed my camera at one girl sitting on the floor among the others, she hid her face behind her knees.  If I put my camera down or pointed elsewhere, she looked up again with face fully visible.  This went back-and-forth until she peered her eyes over the top of her knees and stared at me.  It was a charming photo for it conveyed her personality and shyness.  I often prefer the subject not look at me in a picture, but it’s perfectly acceptable in a personality photo because it expresses the person’s character more strongly when they are looking at the camera, rather than if they were merely looking away.
3 Tips:

1) Shyness can create a charming trait for a photo.
2) Shyness often requires repeated effort to capture.
3) Personality photos are often much stronger when the subject looks at the camera.
Posted by MoMaher at Saturday, October 27, 2012 0 comments

Proper positioning of foreground subject Carol Maher depicts her about to uncork a giant, two-story wine bottle in the village of St. Julien in Bordeaux, France (© Michael Maher). 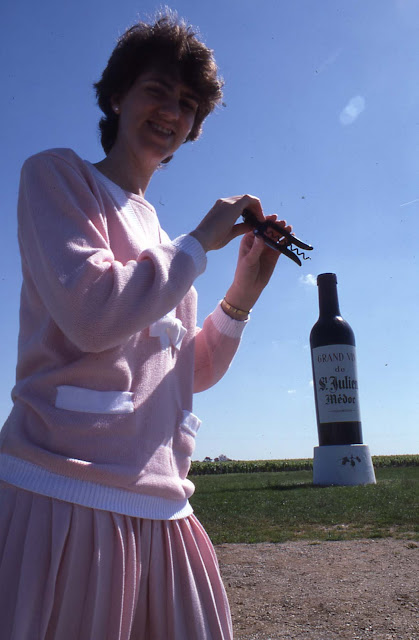 The Photo:
When traveling on vacation, people frequently take photos of themselves or others in front of landmarks or interesting objects. How you position the foreground and background subjects relative to one another can create an illusion of the foreground person being smaller, larger, or similar size as the background landmark. Sometimes you may want to intentionally create such an effect, like a person appearing to be the same height as the Eiffel Tower. This is called altered or distorted size perspective. As my wife and I drove along a road in the village of St. Julien in Bordeaux, France, we spotted a two-story cement wine bottle in the distance. Because we had a wine bottle uncorker in our traveling bag, we decided it would make for a humorous photo if one of us appeared to be opening the giant bottle with our tiny uncorker. We walked forward and backward several times until we got the relative size just right, and had our funny photo.

3 Tips:
1) Where you position your foreground and background subjects will determine their size in your photo relative to one another.
2) This effect, called distorted size perspective, is most often seen in travel photos, but can be used for almost any picture.
3) This technique can also create humorous pictures, such as a fellow traveler towering over a famous landmark.
Posted by MoMaher at Thursday, October 04, 2012 0 comments


The best sports photos are emotional reactions to a big play, not the action itself. 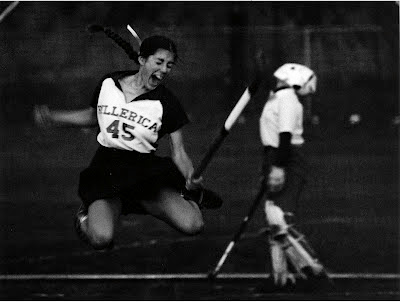 The Photo:
The sun was setting and the women’s field hockey playoff game was about to be decided in a dramatic overtime shootout, with each team getting five shots at the opponent’s goalie to determine the winner.  There wasn’t enough sunlight left to photograph the motion, and the action was too far away to shoot with a flash, but this important game was about to produce some dramatic moments and great photo potential.  My only option was to use what little sunlight remained, which meant I would be unable to capture typical fast sports movement.  To be as close as possible, I positioned myself directly behind the shooter at the center of the field, facing the goaltender.
I selected the longest lens (105MM, f 2.8) that would simultaneously let me shoot from a distance, let in as much light as possible, and not be so heavy that it would cause camera motion and blur the photo.  To get the right amount of light, I set the shutter speed at a very risky 1/60, which is never recommended to freeze action.  This left me able to photograph only moments when players were not moving very much, so I tried repeatedly to time a photo at the instant the players were barely moving.  When one girl scored and jumped high in the air to celebrate, I waited to shoot until she reached the highest point of her leap when her motion was minimal.  The resulting image was an emotional photo of the scorer and beaten goalie that captured the jubilation of the winners, and the disappointment of the losers.
3 Tips:
1) Always look for emotional player reactions because they are almost certainly stronger photos than any sports action.
2) When the light is low, try shooting with whatever light is available because you can’t usually get close enough to use a flash.
3) If you need to use a slower shutter speed, time your shots for moments when the players are not moving very much.