The championship trophy beckons as a winning crew team rows back to the boathouse after a race during Boston’s annual Head of the Charles Regatta (© Michael Maher). 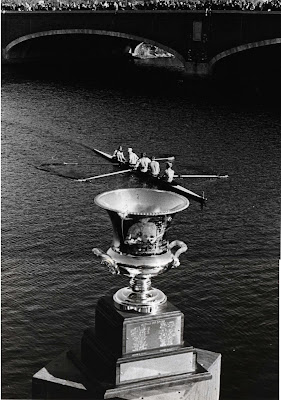 The Photo:
My assignment was to photograph the Head of the Charles Regatta, the largest 2 day rowing race in the world, held annually on Boston’s Charles River. Our college photography class was set loose on this event, and most of us knew nothing about the sport. At the time, I owned only a camera with a 50MM lens, and doubted I would get any good action photos since all the races were held in the middle of the river, out of my lens range. Nevertheless, I photographed from bridges over the river because it got me close enough to the rowers passing under to shoot with my relatively short lens. I also sought more human interest-type photos from the boathouses on shore, looking for rowers getting ready or returning from a race. None of these were particularly great pictures, so I sought out the championship trophy, and climbed high to the top of one boathouse where it sat by the window. Rather than wait around and settle for a boring shot of the formal trophy presentation, I framed a photo with the trophy, a boat of winning rowers and the river. The handicap of my 50MM lens forced me to find an unusual perspective, and gave me a superior and unique picture of the event.

3 Tips:
1) Even when you are handicapped by subpar equipment for photographing sports action, you can always get strong sports features or human interest photos.
2) Not having the optimal equipment forces you to be more resourceful and creative.
3) If you can’t get close up human interest, look for unusual perspectives or juxtapositions, like a championship trophy with top competitors or winners.
Posted by MoMaher at Friday, July 22, 2011 0 comments

Colleen Maher, 6, reacts with joy as she opens the birthday gift from her grandmother, and gets exactly what she wanted (© Michael Maher). 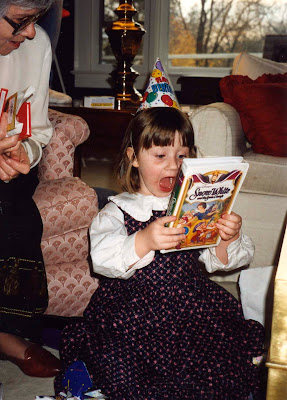 The Photo:
I frequently aim my camera on people as they open gifts to try and capture an unexpected reaction or great facial expression. Often you don’t get anything spectacular, but occasionally you will. The trick is to do this regularly and be in position to get the terrific photo when it happens. For this birthday, I knew the gifts my daughter Colleen would be receiving, and had no idea if her reaction would be anything special. Nevertheless, I positioned my camera in front to clearly see her expression, and slightly off to the side so the gift would not block her face. She opened several gifts, some which I expected would bring her great joy, but she showed no unusually special expression. However, when she unwrapped this present from her grandmother, and saw a Snow White video, she was overwhelmed with joy, and I was able to capture the delightful reaction on her face.

3 Tips:
1) Kids opening birthday gifts can provide outstanding photos of reactions and facial expressions.
2) These photos don’t happen all the time, but you should almost always be prepared and in position to get the picture when it does occur.
3) Be in front with a clear view of the child’s face, and slightly off to the side to avoid the open gift blocking your view of the reaction.
Posted by MoMaher at Thursday, July 07, 2011 0 comments