A fan's reaction can often provide a far better photo than the athletic competition.

A gymnastic fan expresses her surprise as she spies one of the only boys participating in the Lowell Recreation Department gymnastic competition (© Michael Maher, The Lowell (Ma.) Sun). 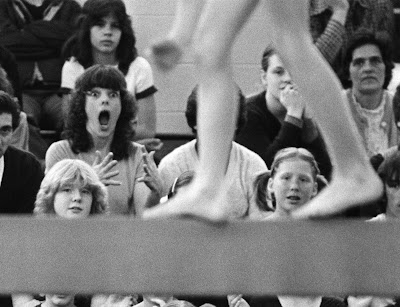 The Photo:
While shooting a gymnastics meet, I concentrated on the gymnasts doing their routines on the balance beam, parallel bars, and floor exercises, but didn’t take much notice of the crowd of spectators. However, when a boy was announced and began his routine, one spectator jumped up and expressed her surprise when a boy was participating in what was usually a girls’ gymnastics competition. The spectator had a wonderful expression, and it was so spontaneous, I don’t think she could ever repeat it if I missed the photo. Her reaction lasted long enough that I had time to change my focus from the event to the stands of fans in time to capture this wonderful moment.

3 Tips:
1) Fans can be very intense while watching a sporting event and potentially provide very strong photos.
2) Scan the crowd of fans periodically to look for compelling expressions or behavior.
3) If possible, include some element of the competition in any photo highlighting fan actions or reactions.
Posted by MoMaher at Saturday, February 19, 2011 2 comments

Professional athletes often control their emotions, so it's challenging to convey the sentiment when they are being honored.

Former Boston Bruins hockey star Bobby Orr thanks the fans during pre-game ceremony retiring his number and raising it to the Boston Garden ceiling (© Michael Maher, The Lowell (Ma.) Sun). 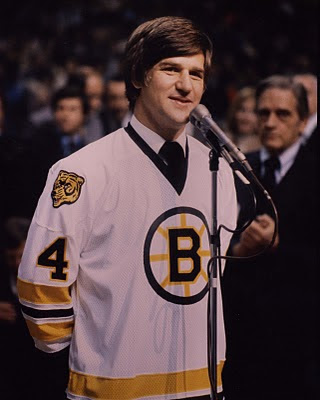 The Photo:
Bobby Orr was one of the most revered athletes in professional sports, especially in Boston. He was that rare combination of being the best player in his sport and an approachable, modest person, whose career unfortunately ended early from knee injuries. When his number was to be retired before an exhibition game against the Soviet National team, the photographic media massed onto the ice to cover the festivities. The pre-game retirement ceremony was long, and good pictures were tough to get. Orr didn’t stand near the banner with his name and number that the Bruins were hoisting to the rafters, and he worked hard to hold back his emotions, so photographers struggled to find one definitive image summarizing the moment. I shot Orr speaking to the crowd, joking with the current Bruins’ players, interacting with his wife, and biting his lip to hold back tears, and the strongest photos were the close-ups of him, even without visible tears, for he did occasionally let the happiness show. The best photo came when he put on a Bruins jersey, so we could photograph a happy Bobby Orr smiling in the uniform he had starred in for so many years.

3 Tips:
1) When a superstar’s number is retired, the player typically displays some tears or emotional sentiment.
2) The ideal photo has the player showing emotion adjacent to the uniform number before it raised to the ceiling.
3) If the player is too stoic to show emotion, look for a close up of the player smiling or waving to the spectators.
Posted by MoMaher at Thursday, February 03, 2011 0 comments