A pro basketball dunk usually has both a powerful facial expression and acrobatic action, all in one shot.

Boston Celtics forward Larry Bird slams one down at the front end of a fast break during the season opener against Cleveland (© Michael Maher, The Lowell (Ma.) Sun).

The Photo:
Larry Bird isn’t normally associated with slam-dunks because his strength was shooting and passing. However, early in his career, he would finish off some Celtic rushes down court with a slam-dunk, albeit not too frequently. This game was the season opener, and Bird was excited to start a year in which the Celtics would contend for (and later win) the championship, so the first time he got a breakaway down court, he dunked to charge up the Boston crowd and his teammates. On this shot, I sat perpendicular to the basket with a longer lens to catch his drive to the hoop and facial expression. Strangely enough, during the years I covered the Celtics, I shot several photos of Bird dunking, and he had his eyes closed like this in every one.

3 Tips:
1) Sitting perpendicular to the basket gives you a great angle to photograph players driving to the hoop.
2) Use an 85MM or 105MM lens and focus on the rim area.
3) Look for shots with players in the air showing intense facial expressions.
Posted by MoMaher at Friday, August 19, 2011 0 comments

Avoid harsh lighting effects and instead create a natural look by bouncing your flash's light off the ceiling; then eliminate eye shadows by flaring a little extra light toward the subject’s eyes.

First Lady Rosalynn Carter speaks to a group of supporters in Pelham, N. H. at a campaign visit for her husband Jimmy Carter a few months before the 1980 Granite State Presidential primary (© Michael Maher, The Lowell (Ma.) Sun). 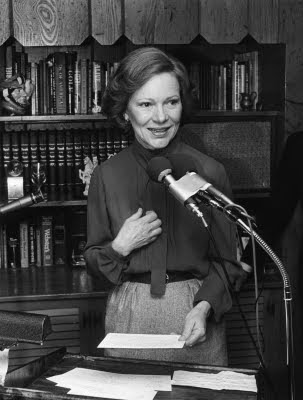 The Photo:
During the 1980 Democratic Presidential primary season, President Jimmy Carter did not go out on the campaign trail, remaining in the White House to concentrate on the Iran hostage crisis. In Carter’s absence, the First Lady repeatedly campaigned for her husband, and on this evening, she was addressing several Democratic supporters at a private home in Pelham, N. H. I arrived about 45 minutes before her, as the Secret Service cordoned off the area. Once inside I met the hosts and was able to help plan where she would be standing for her speech, to ensure the best pictures. The lighting was not sufficient to photograph without a flash, but I didn’t want harsh direct flash shadows, so I planned a bounce flash effect off the ceiling that looked like natural light. I also attached a piece of white paper slightly over the end of my flash to flare some direct light toward her and eliminate shadows under the eyes. I managed several photos of her, all nicely lit, and got a chance to meet and talk with her in this intimate surrounding. It was exciting to meet the First Lady, disappointing that it wasn’t the President himself, but rewarding that I had a natural-looking lighting effect. (Note: the President’s campaign strategy to stay in the White House worked for him in the primary, but not in the general election, when he lost to Ronald Reagan.)

3 Tips:
1) For very famous people with tight security, map out the event and plan your photo in advance.
2) If the light is low, avoid direct flash if at all possible, using bounce flash instead.
3) Famous subjects may be reserved about showing expressions, so watch for gestures to help bring their personality to life.
Posted by MoMaher at Friday, August 05, 2011 0 comments