Fill flash adds light on the foreground subjects when the background is significantly brighter.

Giraffe towers over the jeep during a ride through the savannahs outside Disney’s Animal Kingdom Lodge (© Michael Maher). 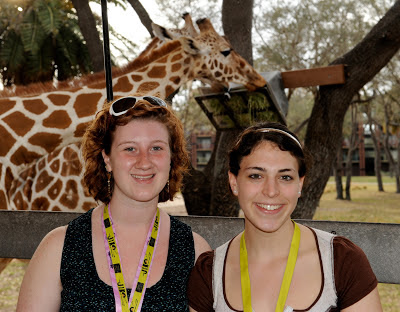 Vacationing at Walt Disney World, we elected to go on a jeep ride through the savannahs surrounding the Animal Kingdom Lodge, so we could see animals like giraffes, zebras, and ostriches up close.  It was easy to photograph the animals alone, for they came very close to our jeep, but because we were not allowed to venture out of the vehicle, there was no way to photograph the individuals in our party together with the animals.  I tried several shots of us inside the jeep in the foreground with zebras and giraffes in the near background, but the animals were much more brightly lit than our faces, making the people almost too dark to be recognizable.  The solution was to use my flash and to illuminate everyone’s faces so they would have just as much light on them as the animals.  When we passed a group of giraffes (called a “tower”), the jeep stopped and I added the fill flash to take several photos of the majestic animals in the background with our happy and perfectly lit subjects in the foreground.
Three Tips
1) Fill flash provides extra light on the foreground subject to match the background lighting.
2) Set your camera to expose the brighter background and fire the flash to light up the foreground subject.
3) Use fill flash for most of your outdoor portraits to make your subjects’ faces as perfectly lit as possible.
Posted by MoMaher at Monday, March 11, 2013 0 comments