Even a simple thing like kids whispering can make a great photo.

Hiding from the camera, a young girl converses with her friend during a St. Louis School public meeting in Lowell, Ma. (© Michael Maher, The Lowell (Ma.) Sun). The Photo:
There’s probably nothing more boring for a photographer than a public town meeting where the only thing happening is not very visual -- people making motions and rendering objections about local government issues. You usually end up with head shots of people speaking or gesturing with their hands. On this occasion, I was lucky that two young girls in attendance were having a great time conversing back and forth while their parents were paying rapt attention to the meeting. The girls didn’t want to make it easy to take their picture, so they covered their faces with their hands. I played a game of cat-and-mouse with them. They saw me point my camera and hid their faces. I put down my camera, and they talked with their faces visible, but when I raised my camera, they hid their faces again. This went on for awhile, but one girl stopped hiding her face as the other, still hiding hers, whispered that I was taking their picture.

3 Tips:
1) Children will express their personalities in the most unlikely situations, so be alert for a great photo opportunity.
2) If children make it difficult to take their pictures at first, be patient and persistent.
3) Watch for powerful children’s smiles or facial expressions that you won’t see on adults.
Posted by MoMaher at Saturday, April 28, 2012 0 comments

Fire photos almost guarantee your pictures will be published.


Flames envelop the side of a vacant tenement during a four-alarm fire on Fayette Street in Lowell, Ma. (© Michael Maher, The Lowell (Ma.) Sun). 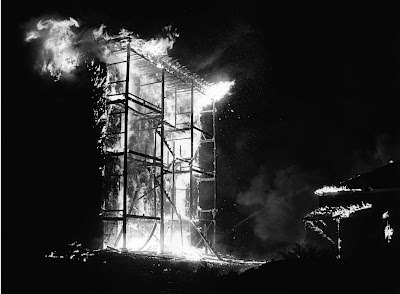 The Photo:
Following up on a nighttime police radio alert about a nearby house fire, I encountered a large plume of smoke billowing from both the front and top of a 3-decker house, with fire engines all around. First I looked for dramatic photos -- either big flames or some human emotion -- but nothing like that was visibly present, and I learned there weren’t any residents at risk because the house was a vacant tenement. It was easy to get a few good photos by using my flash to photograph the firemen spraying water on the smoke clouds pouring from the front. When the smoke got heavier in the front and clouded my view, I moved to the back of the house where some small flames were showing and the Fire Department was congregating with additional hoses. Suddenly the entire rear of the house exploded into bright flames, so I turned off the flash to shoot natural light photos of the burning house brightly contrasted against the black nighttime sky. The flames stopped as the fire was brought under control, so I patiently looked around for photos of the firemen doing strenuous firefighting activities, or reaction shots of people watching. However, there was almost no one around and there was nothing compelling to shoot in the reactions of the fire and police, who were disgusted with having to fight yet another fire at an abandoned building that was likely caused by an arsonist.

3 Tips:
1) The strongest photos of fires contain some element of human interest or drama, such as firefighters strenuously working, residents anxiously watching, or spectators looking on intently.
2) If there is no human perspective, look for bright flames illuminating against a black nighttime sky.
3) Firemen spraying their hoses on the burning building is another very strong photo.
Posted by MoMaher at Thursday, April 12, 2012 0 comments